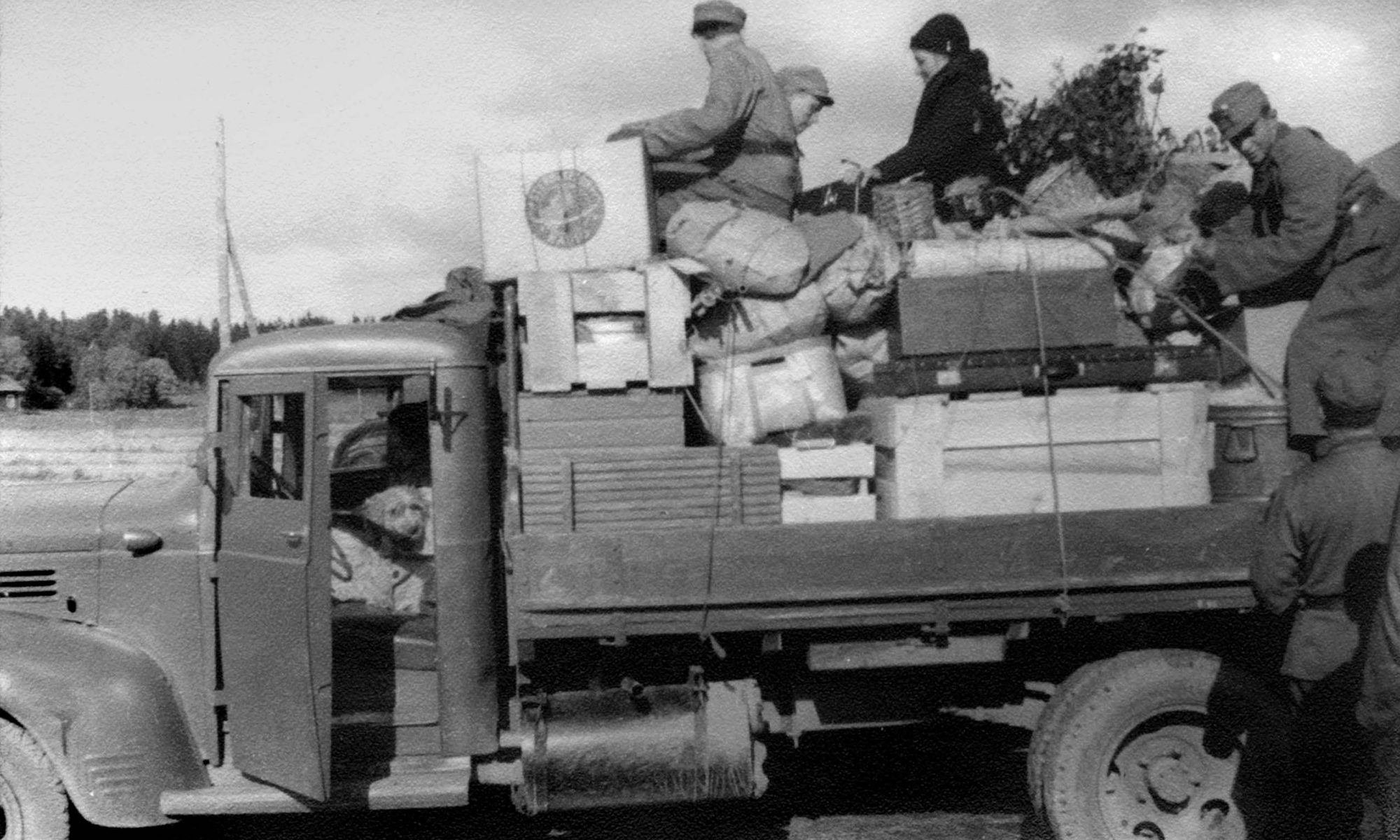 The so-called Porkkala Parenthesis is a concept arousing unpleasant memories for the old residents of Kirkkonummi, Siuntio and Inkoo. Although the local people will never forget the evacuation of the population and establishment of a military base of a foreign country in the native locality, there have undoubtedly also been pleasant memories of returning back home and starting the rebuilding work.

The Cape of Porkkala has throughout history been a central place with regard to the navigation in the Gulf of Finland. As early as in the Middle Ages the Danish King Waldemar II Sejr mentioned a place named Purkal in his descriptions. The Gulf of Finland was crossed at the narrowest point near Porkkala. During the 17th century a pilot station was built on Rönnskär island in front of the Cape of Porkkala and a lighthouse was erected on the same island in the year 1800.

The narrowest part of the Gulf of Finland has been a point of military interest over the years. During the first world war permanent fortifications were built on the cape and in front of it when Russia aimed at building the so-called “sea fortification of Peter the Great” as a protection for their capital St. Petersburg. The construction was interrupted by the Revolution and the fortifications in front of Porkkala were handed over to Finland when the country was declared independent.

Later on also the naval base of the Soviet Union was named after this strategic place.

Only nine days were granted for the actual evacuation of the area. This was a herculean task as almost 10,000 residents and their movable property including the whole harvest of potatoes and corn, and part of the hay had to be moved out.. Furthermore, more than 8,000 domestic animals were evacuated from the Porkkala region.

Many dramatic and exciting events happened during the evacuation and lots of stories of these times are still being told. Among others, the artist Lennart Segerstråle played a very special and important role when the Church of Kirkkonummi was evacuated. The altarpiece of the emptied church was replaced by a huge fusain (charcoal drawing); an esthetic and ethic protest that almost caused a political incident. Nowadays the charcoal drawing hangs again in the Church of Kirkkonummi. Siuntio railway station belonged to the rented land but the village stayed on the Finnish side. The small municipality of Degerby was almost entirely left within the rented region, which was very fatal for its future development.

After September 1944 the Porkkala region was a closed area to its former residents, kept alive only in peoples’ minds. Feelings were bitter as the grown-ups did not believe in ever returning to their native locality again; after all the lease was for 50 years. They tried to settle down in new places but it was not easy, because Finland had to find new homes for about 400.000 Karelians at the same time, who had also been forced to leave their homes in the conclusion of peace. The compensations granted for their lost property was a meagre consolation. From November of 1947 it was permitted to travel by train through the area. However, the train windows were shuttered during the journey between Kauklahti and Tähtelä. This “the world’s longest tunnel” became an item of interest also internationally, but the Russian guards on board the trains watched very thoroughly that no photographs were taken. Otherwise the Porkkala region was a white spot on the map of Finland.

The Russians immediately started building their huge military base. Two airports were constructed, one for fighters in Friggesby and another for the frontier guard planes in Degerby. Kirkkonummi became the centre of the base where e.g. the staff was based. The churches within the region were generally used for all sorts of cultural activities. Also civilians moved to the region and became in a short time quite selfsufficient with their own collective farms, shop, school, cinema and hospital.

Even though the military base lived its own life shielded from the eyes of the Finns, the veil of secrecy and mystery can be lifted a little. After the disintegration of the Soviet Union archives have been opened to researchers and people dear to talk more freely of their memories. Thus we can already tell e. g. of the times when Porkkala was the place of employment to technician-lieutenant Gennadi Golinskij, who worked in the region as a dock and construction worker in 1950-55. Along with his work Gennadi also did a lot of hunting and fishing; in the winter he went skiing in the Porkkala forests and fields, so he tells.

Many a young Russian served his time in the army in the Porkkala region. One of them was Valentin Smirnov, a sergeant serving at Majvik as a radio lookout. In the grand manor house on top of a high hill the Finnish radio was listened in at and the base of the Finnish scouts on the opposite shore of the Gulf of Espoo was observed. In the 1990s Valentin returned to Kirkkonummi and Majvik to tell about his experiences as a young soldier in the closed rented area.

At that time 20-year-old Valentina Minosjan was employed at the military hospital at the Porkkala base. She had been transferred to the base from Lomonosov near St. Petersburg. According to her memories they lead quite a normal life after the conclusion of the peace. Soldiers were seen only at the hospital, otherwise seldom. People watched athletic games at the Kirkkonummi field and attended concerts at the officers’ house; every now and then even dances were arranged.

The only milk-sovchos in Sjundeå was situated in Nordanå. In a cowshed built for 50 cows there were 100. Small-statured women managed the cows and left soles, size 30, in the manure.

The Sjundby stone castle from the 16th century in Siuntio served as staff mansion. Reminders of this time are the wall scribblings on the outbuildings and photographs of soldiers, found in the region.

Many children were born in Porkkala. One of them was Alla Gorshkova, a journalist now living in Käkisalmi. She was born in 1946 in Porkkala, went to kindergarten there and attended three classes at school before the region was returned to Finland in 1956.

She still has vivid memories of the playgrounds in Jorvas with the downhill skiing in winter and swimming in the dam basin in summer. Her mother worked at the hospital while little Alla went to the nearby kindergarten. Alla has kept in touch with her childhood friends. The Porkkala times have been savoured in everybody’s minds as a good time and those born and brought up there still think of the region as their native locality.

Who were those who lived in Degerby during the Parenthesis? Many faces appeared on the film found in Brasis 1956. Who was that little girl? You can read more about her on the home pages of the Degerby Igor Museum.

Nothing returned to its former state. The situation in the world rapidly changed in the 1950s. The military centre of gravity of the Baltic shifted to the south, the naval base of Porkkala lost its strategic importance and became an economic burden to the Soviet Union. In 1955 time was politically ripe for the returning of the rented region. There was a breath of mild weather going through the times of the cold war when the Soviet Union mitigated its relationships to the West. The returning of Porkkala was agreed upon in the autumn of 1955 and the handing over happened on January 26, 1956.

PORKKALA-UDD is the name of our new book published in the Autumn of 2010.

The leasing of Porkkala to the Soviet Union from 1944 to 1956 had a powerful influence on common people’s lives. Unique pictures. Five languages: Finnish, Swedish, English, Estonian, Russian. Authors: Lena Selén and Berndt Gottberg. Published by the Porkkala Parenthesis Association.

The picture shows Russian Marina Kalinina, born in Finland, (to the left), showing pictures from her time in Kirkkonummi to Iris Vuorinen.

The book is for sale at Akateeminen kirjakauppa in Helsinki and in several bookstores around Finland, also at Silver-Ring’s bureau in S:t Petersburg. It is possible to order it from SE-Action, info@seaction.com.

Before, after and during the Parenthesis tells in three languages, Finnish, Swedish and English, about the lease period in Porkkala. Authors: Lena Selén and Berndt Gottberg.